Can graphene and graphene oxide be used in biosensors

In recent years, graphite column and graphene oxide (go) have been introduced into biosensors based on the principle of fluorescence resonance energy transfer (FRET). Fluorescence resonance energy transfer (FRET) refers to the transfer of energy between two fluorescent groups from the donor to the acceptor. FRET has become a powerful tool to detect the changes of nano scale distance and nano scale distance of biomacromolecule. Graphene oxide has a strong adsorption capacity for single strand DNA, and can quench the fluorescence of the fluorescent group labeled on it. When the small molecule ligand of G-quadruplex is added, it can induce the single strand signal probe to form the structure of G-quadruplex, so that it can fall off from graphene oxide, and the fluorescence can be restored. Then caspase-3 cut off the polypeptide probe to make the fluorescence group fall off from graphene oxide, and the fluorescence can be restored. In order to further improve the sensitivity, we adopt the strategy of enzyme cutting and then adding graphene oxide. When caspase-3 is present, the polypeptide chain is cut off, the end marked with fluorescence group only contains lysine residue, the fluorescence group will not be adsorbed by graphene oxide, and the fluorescence will not be quenched when graphene oxide is added. The dynamic range of Caspase-3 response was from 1.45 ng / ml to 72.5 ng / ml, and the lowest detection concentration was 1.45 ng / ml. Graphite lubricating column is easy to be popularized and can be extended to other protease detection fields. The detection purpose can be achieved by changing the sequence of polypeptide molecular probe so that it can interact with the specific protease to be detected. Based on the detection platform of go-fret, we developed several methods to detect protease and small molecule, and realized the detection of Caspase-3 protease based on the detection platform of go-fret. With the development of nanomaterials science and biotechnology, a variety of nanomaterials have been applied to many fields, such as biosensor design, biomolecular detection, biological toxicology test, molecular medicine and so on. Theoretical and experimental studies have shown that graphene can effectively quench the fluorescence of various organic fluorescent groups and quantum dots (QDs). Compared with other organic quenching groups, graphene has higher quenching efficiency, lower background fluorescence and higher signal times ratio. A polypeptide probe with fluorescent group at one end was designed. The phenylalanine residues on the probe and graphene oxide on the water surface were adsorbed together by π – π electron accumulation. At this time, the fluorescent group acts as the donor of fluorescence, and graphene oxide acts as the acceptor of fluorescence. Compared with the non covalent crosslinking method, the covalent crosslinking method has more advantages. It can eliminate the competitive adsorption of non-specific proteins and improve the stability of the sensor. The range of Caspase-3 protease is 7.25 ng / ml to 362 ng / ml, and the lowest concentration detected is 7.25 ng / ml (about 0.4 nm). Using graphene oxide as quenching agent, a method for screening small G-quadruplex ligands was developed. On the basis of the previous work, we found that non-specific protein (BSA) would interfere with the adsorption of graphene oxide on the peptide probe, so we covalently cross-linked the fluorescent group labeled peptide molecular probe on graphene oxide, using this new strategy to detect caspase-3. Graphene is a new kind of nano material with single-layer and two-dimensional honeycomb lattice structure, which is closely packed with carbon atoms. Its special single atomic layer structure makes it have many unique physical and chemical properties. The basic application research of graphene and graphene oxide (go) has become one of the foreword and hot topics. We used the monomer of traditional Chinese medicine as the ligand of G-quadruplex, and found that a planar flavonoid molecule has a high efficiency in inducing single stranded DNA to form G-quadruplex. The experimental results show that this method is simple, rapid and effective in screening small G-quadruplex ligands. Graphene with large-scale two-dimensional aromatic plane can be used as the substrate for modifying specific biomolecules, which improves the biocompatibility, stability and selectivity of graphene. 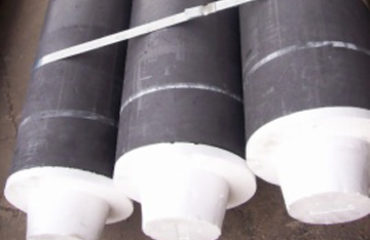 The largest amount of graphite electrodes is used for steel making

The production process of graphite electrode is unique