What is high purity graphite plate

Graphite anodes have been used in electrolyzers and diaphragm electrolyzers for a long time. During the operation of the electrolyzer, the graphite anode will be consumed slowly. The graphite anode is 4-6kg per ton of caustic soda in the electrolytic cell, and about 6kg in the diaphragm electrolyzer per ton of caustic soda. As the graphite anode consumption becomes thinner, the distance between cathode and anode increases, and the cell voltage will gradually increase. Therefore, after running for a certain time, it is necessary to stop the tank and replace the anode. In the mid-1960s, Dutch h. bill invented a titanium based metal anode coated with ruthenium. Because the metal anode is basically not consumed, it is also called dimensionally stable anode (DSA). In addition to no consumption and long service life, metal anode also has the advantages of high current efficiency, good quality of chlor alkali products, energy saving, no special pollution and less maintenance work. Therefore, it is favored and widely applied. However, due to the high price of metal anode, the scarcity of metal ruthenium resources, the supply is difficult to guarantee, and when using metal anode, the content of calcium and magnesium ions in electrolyte brine should not be more than 5 × 10. Therefore, it is necessary to carry out strict purification treatment on the electrolyte. It can be predicted that the metal anode will not completely replace the graphite anode in a relatively long period of time.

What Should Be Noticed In the Recovery of Graphite Electrode? 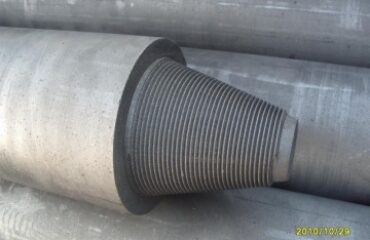